Discworld Fanon Wiki
Register
Don't have an account?
Sign In
Advertisement
in: The Assassins of A.A. Pessimal, Assassins' Guild School 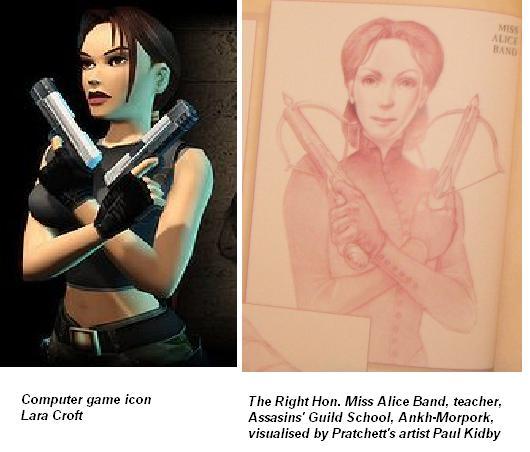 The Right Honourable Miss Alice Band is a fairly new teacher at the Assassins' Guild School, recruited to deal with the influx of girl pupils after the School went co-educational. She first appears in the list of teachers and Houses given in the Assassins' Guild Yearbook and Diary where we learn she is housemistress of Tump House (also variably named Mantis House. This is a continuity error in the canon). She teaches Traps, Locks and Edificeering and her hobby is Stealth Archaeology. In Night Watch, she has an off-screen cameo role, where she sends trainee assassin Jocasta Wiggs on a humbling mission to target Sam Vimes, knowing this will harmlessly come to failure and teach her a lesson about over-confidence. She has a suspicious personal resemblence, as drawn by Paul Kidby, to computer sprite Lara Croft. There is a suspicion that she uses the alias "Lorenzo Cronk" for some missions. She is also closely involved in the Scouting movement on Ankh-Morpork, maybe in a capacity of Guidance.

In the Pessimal Discworld[]

Community content is available under CC-BY-SA unless otherwise noted.
Advertisement